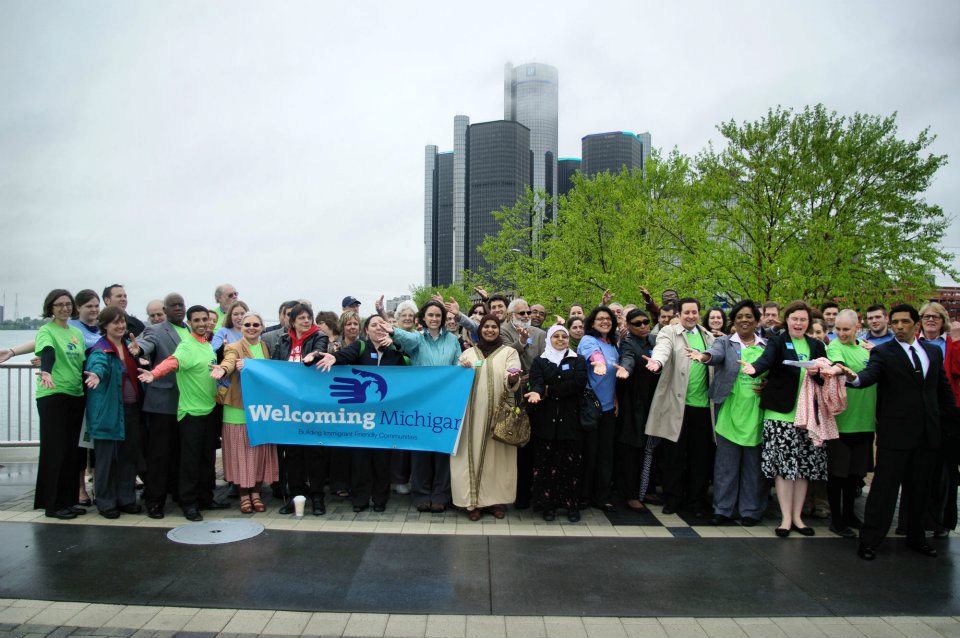 Ten years ago Global Detroit launched with a strategy document based on 18 months of study and engagement with over 100 Southeastern Michigan’s business, economic development, health care, university, auto, philanthropic and immigrant community leaders. Top among the eleven strategies we suggested for the region to build an inclusive regional economy was a call to make the region welcoming.

For me personally, it felt like a watershed moment to have Detroit Chamber executives stand up in the final deliberations and state that “welcoming” needed to be a top priority for the region and that we couldn’t “fake” our way to welcoming by only embracing highly-skilled professional immigrants.

During the study process, Congresswoman Rashida Tlaib, one of the 36 Global Detroit Advisory Board members, introduced me to David Lubell, the founder and then-director of Welcoming America. Together we approached the Michigan Immigrant Rights Center (MIRC) with a request that they launch a Welcoming Michigan initiative modeled on the Welcoming America approach to ensure Michigan communities are welcoming to immigrants and refugees.

Welcoming Michigan was the first strategy from the Global Detroit strategy document to be launched as program in 2011. It wouldn’t be until 2014 that Global Detroit actually had a full-time staff person and would run programs itself.

In the nine years since Welcoming Michigan launched it has become a nationally-recognized leader in the welcoming movement. With 22 welcoming cities, counties and townships, Michigan is home to more officially-declared welcoming communities than any other state in America! Christine Sauve, the determine and bright leader behind much of this success, was recognized by the Obama White House as a national Champion for Change for immigrant integration.

Earlier this year MIRC decided to refocus its work on immigration law and policy, and it was time for Welcoming Michigan to find a new home. MIRC asked Global Detroit if we could assist in that process and, despite the challenges that we and all nonprofits are facing in the midst of the COVID-19 pandemic, we agreed that the work was too important to not agree to assist. We have agreed to lead the work for the rest of 2020, including convening Welcoming Michigan’s stakeholders to help determine a pathway to sustain the program, secure resources necessary for its future and identify the appropriate governance/structural home, be it at Global Detroit, as a stand-alone nonprofit organization or as part of another organization.

The current climate is not the time to back away from engaging Michiganders, addressing their fears and concerns about our changing demographics, and building welcoming communities that are at the foundation of an inclusive regional and state economy. We look forward to doing what we can to sustain Welcoming Michigan and want to acknowledge the incredible work that Christine Sauve, Denni Middleton, Jonathan Romero, Susan Reed and the entire team at Welcoming Michigan, the Michigan Immigrant Rights Center and all those who have build Welcoming Michigan have done. We look forward to facilitating the next chapter.