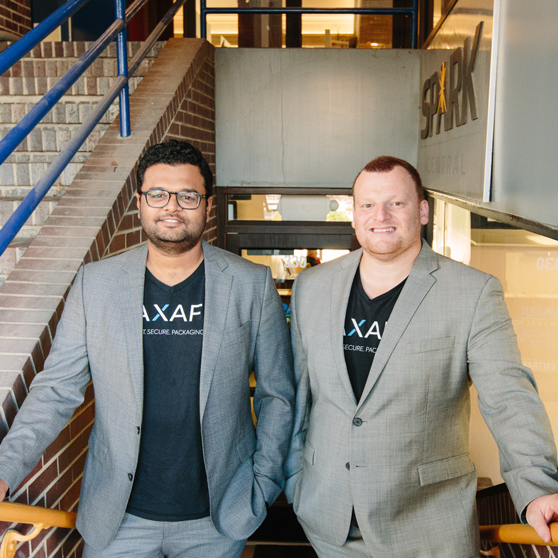 Ashok Seetharam was living in Milwaukee when his startup, PAXAFE, began to take off. But he wasn’t sure he’d be able to stay. PAXAFE was Ashok’s third startup. After moving to the U.S. from India and graduating from Brown University with a graduate degree in Biomedical Engineering, he co-founded Orthopedix and led the company through XlerateHealth, an early-stage healthcare accelerator program. Orthopedix ultimately licensed its patented technology to a major orthopedic implant manufacturer. Next, he oversaw product development and a team of engineers for another healthcare startup, Toggle Health.

In late 2018, Ashok and Ilya Preston founded PAXAFE in Milwaukee. Ilya’s family immigrated from Russia when he was a child. He and Ashok met at XlerateHealth in 2017. They originally helped kickstart a Minnesota startup focused on the transport of medical specimens, but ended up parting ways to start their own company. PAXAFE develops hardware and software IoT solutions that enable cheaper, intelligent shipping insurance.

International startup founders face major challenges to launching their companies in the U.S. To remain in the country, they typically need an H-1B visa, which is available to foreign-born “specialty workers” in specific, largely high-tech fields. Ashok was permitted to remain in the U.S. for a short time on a different visa following his graduation from Brown, but he needed an H-1B visa to stay.

Fortunately for Ashok, in late 2018 Global Detroit launched a program called Global EIR. A partnership with the national Global EIR program, the program places foreign-born startup founders at universities to teach and mentor. By working at the university, Global EIRs are able to legally work in the US. This affords them the opportunity to launch their startups here and apply for a concurrent H-1B through their company. Global Detroit currently partners with the University of Michigan’s Economic Growth Institute on the program. Ashok was accepted, and PAXAFE moved their headquarters to Ann Arbor last summer. The company has recently closed on an additional $650,000 round of pre-seed funding, bringing their total raised in 2019 to almost $1 million. Working out of Ann Arbor SPARK, they have begun piloting their product and hiring for new positions.

“I didn’t think it was possible to continue building my company in the U.S. when I didn’t make the H-1B lottery,” Ashok recalls. “That all changed when I learned about Global Detroit and Global EIR. Not only did they help with my immigration through the Global EIR program but also continued to provide unparalleled support– both personally and with the business–which maximized our chance of success.”