Discovering What Is Possible: Helping Marabou International Launch in Michigan 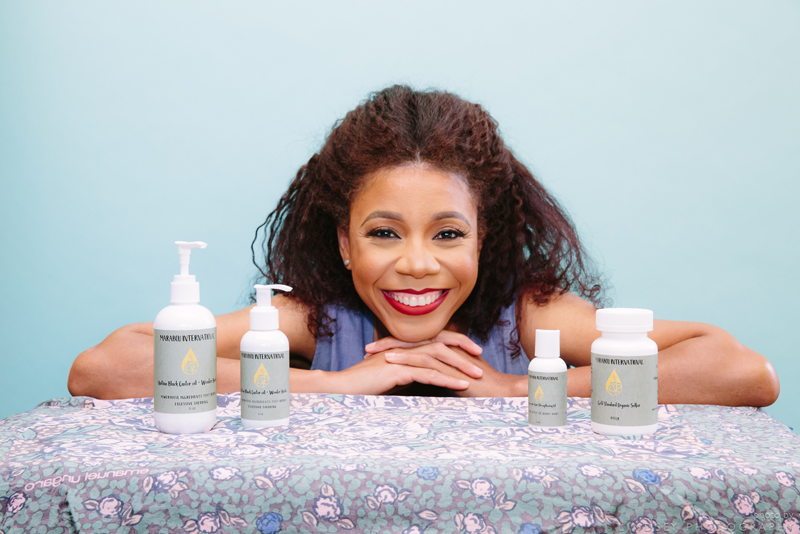 Carline Dugue first came to the United States in 2009 to pursue her undergraduate degree in chemistry at Kalamazoo College. In 2013, she returned to her native Haiti to participate in a peace project. But she wanted to do more to improve economic conditions in her home country, so she launched Marabou International. The business sells hair products that use castor oil, Ayurvedic herbs and other ingredients sourced from Haitian farmers.

Carline returned to Michigan in 2015 and continued to operate her business in Haiti. She hoped to move her operations to Detroit, where she now lives, but she didn’t know where to begin. Then, Maggy Corkery stepped in. Carline knew Maggy through the Haitian Network Group of Detroit, a group Maggy co-founded. Maggy is also a master’s of social work student at Wayne State and an intern with Global Detroit. She told Carline about “Small Business Basics for Immigrant Entrepreneurs,”  a workshop series that Global Detroit was launching in partnership with ProsperUS Detroit, and encouraged her to apply.

Figuring out rules, regulations and processes is challenging even for U.S-born entrepreneurs. It’s even more difficult for those who are unfamiliar with our systems and, sometimes, the language. To help small businesses overcome these hurdles, Detroit has one of the most robust entrepreneurship support ecosystems in the U.S. But immigrant business owners don’t always learn about these resources or trust that they were designed for them. That’s why Global Detroit works as a trusted connector in Detroit’s immigrant neighborhoods. We designed the “Small Business Basics” workshop series because we knew many immigrant business owners were struggling with the same questions Carline had: How do I register my business? What accounting and bookkeeping processes and tools should I use? What are best practices in the U.S. around business operations, hiring, training and retention?  Participants got answers through a series of six weekly workshops, and also received one-on-one consultations to address specific needs.

“From the program, I was able to register my company officially,” Carline explains. “There was a contractor that the program brought in who was talking to us about how to register our company and under what entity. I scheduled a meeting with her for half an hour and she was able to help me register the company and also create an EIN number.”

Carline also learned about and applied for a Motor City Match technical assistance grant to develop her business plan, but found the process confusing. “I know what I want in my mind. But when I was filling out the application, there were so many questions and I didn’t know how to properly answer them,” she says. Her proposal was rejected, so she reached out to Maggy and Gracie Xavier, Global Detroit’s director of corporate and economic development strategy, for advice. They encouraged her to reapply and connected her with staff at ProsperUs and the Detroit Economic Growth Corporation, who were able to give her feedback on her second application. The latest round of awardees were announced just last month, and Carline was among them.

ProperUS also connected Carline to the Shop313 program, a partnership between Shopify and the Detroit Pistons designed to get more Black business owners online, to launch a new website. She expects the new site to launch in June.

Like many immigrant entrepreneurs, Carline has many irons in the fire. She also runs a cleaning service, and she is completing a bridge program to Wayne State University Medical School, where she will start later this summer. She is considering concentrating on dermatology to complement her growing business, which she hopes to expand to sell Haitian food products and coffee.

“Before I met Maggy, I knew I had the idea of bringing my products to the U.S., and I thought it was not going to be possible. I was not aware of any opportunities out there for immigrant business owners and I knew I had a lot of challenges in terms of getting the proper license to bring the products from my home country to the U.S.,” Carline explains. “Working with Global Detroit and ProsperUS gives me hope. It makes me optimistic that I can be an immigrant entrepreneur who is successful here in Detroit.”