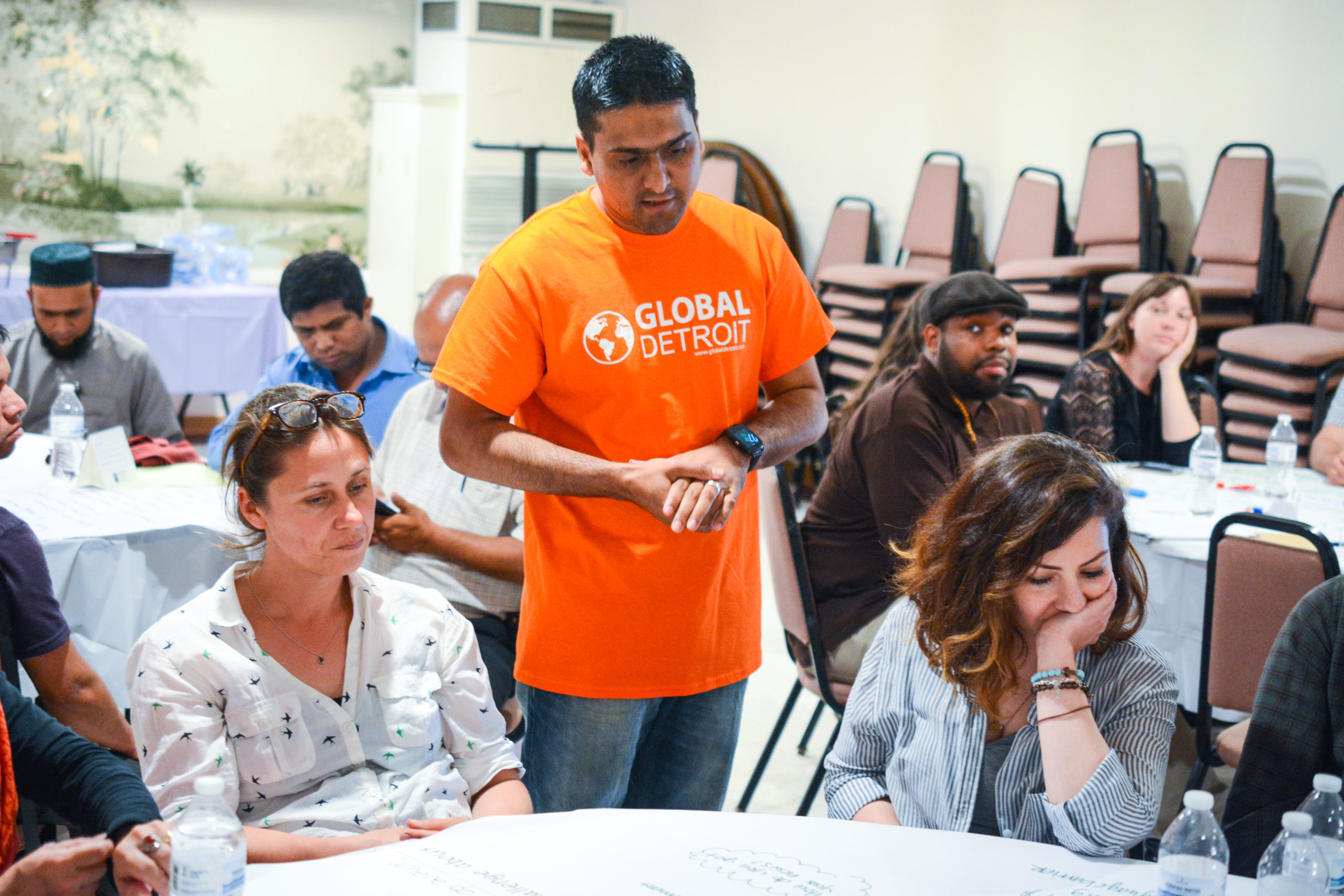 I was hired by Global Detroit in 2016 to lead community engagement for the Banglatown Vision + Action Plan, which Global Detroit was developing with hundreds of community members and small businesses. We did this in partnership with Powerhouse Productions, Bandhu Gardens and several other organizations already active in the neighborhood.

I had recently moved to Hamtramck from my hometown of Moulvibazar, in the Sylhet district of Bangladesh. Prior to this, I’d completed a bachelor’s degree in English literature in Bangladesh and a diploma in strategic studies in London. As someone new to Banglatown but steeped in the Bangladeshi community, I was able to see the community with new eyes and experience it and understand where the gaps were. For the first few months it was hard building trust. I was new, so it took some time to understand how I should work. I had a lot of help from Raquel Garcia, who was Global Detroit’s director of housing and community partnerships. Raquel is a seasoned community organizer, and she had been building strong relationships in Southwest Detroit for some time. She taught me the outreach piece. And then I made it my own. A lot of people in Banglatown are from Sylhet, so they could connect with someone from back home who speaks the same language.

A Trusted Connector in Banglatown

At first, we surveyed residents, collecting people’s stories and their concerns. Then, in phase two, we started connecting with other resource providers and figuring out what we could offer. We started asking the question: “what is really needed?” We found people needed help with their energy bills or fixing their porch. They didn’t have extra money saved to pay for these repairs. The biggest concern was access to information. People didn’t know about a lot of resources that were available. People often don’t realize, especially if they are new to the country, that resources are available or where they can go to get what they need.

Also, even if they know where to go, the places with the resources can be very hard to navigate. So you have to think about not just, is the resource there in the community? But also, how do people access the resource? Access does not mean just walking into an office and getting the information. Take the Department of Human Services, for example. They don’t have a Bengali interpreter and their letters aren’t translated. A Banglatown resident may know they need to go there, but they would have to wait for someone who speaks English to go with them. A lot of places try to address this challenge by using Google Translate, but that is not accurate or effective, and it often just confuses people more.

The other thing a lot of Banglatown residents were concerned about was safety. But again, they didn’t know who to talk to. They were distrustful of law enforcement and they didn’t know about the Neighborhood Police Officers. There was a language barrier between the Bangladeshi residents and their neighbors, and many were shy about reaching out. They hadn’t built trust yet. So the Bangladeshi residents needed someone who would give them a platform to share their experience. That’s what Global Detroit became. We opened a door for them, giving them access to information and becoming a partner in expressing their visions for the community. We helped connect them to their neighbors so the community could begin working together to realize collective goals.

We encouraged residents to form block clubs and the Department of Neighborhoods helped people with tools and resources. Residents didn’t know they could fill out paperwork to get a cleanup done or get volunteer help. We took people to neighborhood offices to meet district managers. We advocated for Bangla-speaking staff at DHS and now they have a part-time Bangla-speaker.

We also partnered with the New Economy Initiative to do outreach for their NEIdeas small business funding program. Before we got involved, they had very few applicants from Banglatown or Southwest Detroit. Business owners didn’t even know what a grant was, they thought anything they get from anyone they would have to pay back. I had to have a few conversations with someone before they began to trust the process and decided to apply. Then, I helped with translation and making sure they understood the guidelines. In 2018, the last year of the program, Global Detroit provided information to more than 1,000 business owners in Banglatown, East Davison Village and Southwest Detroit  and we helped more than 100 apply. Twenty percent of the winners that year were from these neighborhoods. They all received $10,000 grants.

One thing I’m especially proud of is being a part of Global Detroit’s growing relationship with the East Davison Village Community Group. East Davison Village is largely African American, with some Yemeni and Bangladeshi immigrants moving in. But the neighborhood has been largely ignored for a long time. When I knocked on one neighborhood leader’s door, she told me, “In maybe a decade, there is no group that came and asked us how we were doing.” Now Global Detroit works closely with the community group. We helped them receive their official nonprofit designation last year. They’re getting attention from the city, they’re working with the Land Bank to purchase vacant parcels and turn a vacant house into a community hub. They’re building community power.

As I was leaving Global Detroit for my new role at DEGC, we secured funding from MSHDA to help residents in Banglatown and East Davison Village with home repairs. I was so happy because this is what the residents told us they wanted. Every single time I talked to people, they wanted their roofs fixed, their stairs fixed, their porch fixed, they wanted a ramp. So many times I stumbled upon a person who was struggling to get these services, and then Global Detroit was able to help provide them.

Sometimes it’s hard to recognize the importance of a community advocate. That’s what Global Detroit is, an advocate for all the residents, families and business owners in Detroit’s immigrant neighborhoods. We get the ball rolling, get residents and business owners the information and connections they need. We help break down barriers and bring partners together. All of these are essential to get the work done. It takes time, and we are just now seeing the results of efforts we began when I joined the organization. I am so grateful to see what is happening now and know that all my work that I started in 2016 has really paid off.

(Photo: Muhit at a community conversation in 2016)